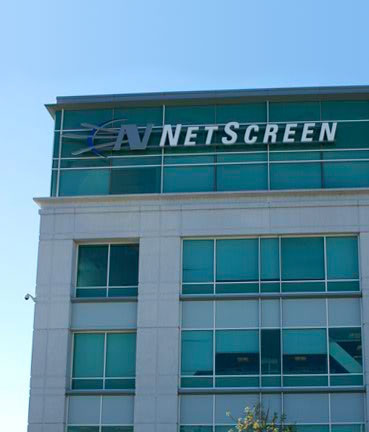 Years ago when we were working out of Menlo Park, California, we did a logo for a startup company like so many projects we did “back in the day”. This was a typical startup company; small non-discrept office in an office park full of dentists, psychologists, accountants and of course startup after startup. They had a handful of employees, a few cubicles, rental office equipment from 1985, all squeezed into about 800 sq. feet. We created a nice logo, business cards, presentation folders, datasheets and of course a website. After the project was completed we simply filed them away with all of the other startup companies that came and went during that era. The company was called NetScreen and they had developed a firewall device for internet security. Soon after we moved our office to Danville, California, on the other side of the bay, and it would be years before we would drive the roads near our old stomping grounds. One day, as I happened to drive down 237 in Sunnyvale, there it was; a huge shiny hi-tech building and our logo displayed prominently at the top. We had made it big time! I quickly exited the freeway and navigated through the streets to find the entrance. It was a Sunday afternoon and the parking lot was empty except for a few cars. I parked my car and grabbed my camera. Which to this day I still do not know why I had a camera with me since digital phone cameras were still a good 5 years away, but fortunately I did. I started to snap a few pics of the building when I was approached by a well dressed man. With a confused look on his face, he asked why I was taking a picture of the building. I told him that years ago we had designed the logo and had no idea they had become such a large company and had this fancy new building, obviously having much success along the way. He was an employee of NetScreen and said to me, “Have I got something to show you… but it won’t last long.” I wasn’t quite sure what he meant, but he brought me into the main lobby of the building and there it was, our logo plastered 2 stories tall in the interior and an area called the NetScreen Museum. 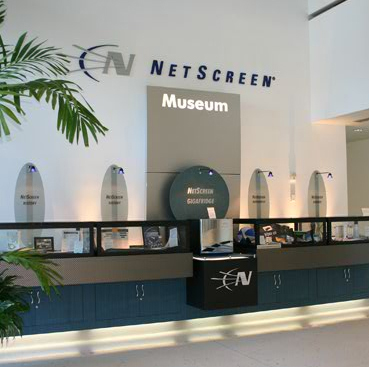 There were multiple enclosed glass cases with everything imaginable bearing our logo; coffee cups, awards, pens, shirts, notebooks and more. There must have been at least 50 items. It was a very surreal experience, kind of like there was this whole other world going on that you knew nothing about. He said, “Be quick, there are guards and you are not supposed to be in here. Take as many photos as you can because the company was just sold and they are taking everything down this week.” Our beloved logo, 5 stories atop the building was about to disappear just as quickly as it was discovered. The joy of knowing that your logo had made it big time was amazing, but then realizing that oh so quickly it was all about to end, felt far more like a sad dream than reality. I snapped photos of everything I could, but often found myself not looking through the camera lens but gazing among the artifacts like an anthropologist must feel when an egyptian’s tomb is discovered. It was cold and quiet, just the sounds of footsteps from my accomplice as he followed me around. He definitely was enjoying the moment as much as I was, smiling the entire time, which felt a little odd to me knowing that the company he worked for was about to close the doors and strip itself of it’s identity. I could sense it was time for me to leave and truly had a sad feeling come over me. I turned to my acquaintance and gave him my condolences. I know what it is like to work for a large company that is sold; ex-employees scatter everywhere trying hard to land on their feet with a new job. It can be extremely challenging. However, he turned to me with the biggest smile I had ever seen from an employee about to get the ax and said, “Don’t feel bad. They bought us for $4 billion dollars. Life is good.” Our little logo helped grow this company to be worth $4 billion dollars???? Darn! Maybe I should have charged a bit more.